Here is the working PoC that can triggers OOB read.

Here are graphs before and after SimplifiedLowring phase, the critical phase that triggers OOB access. 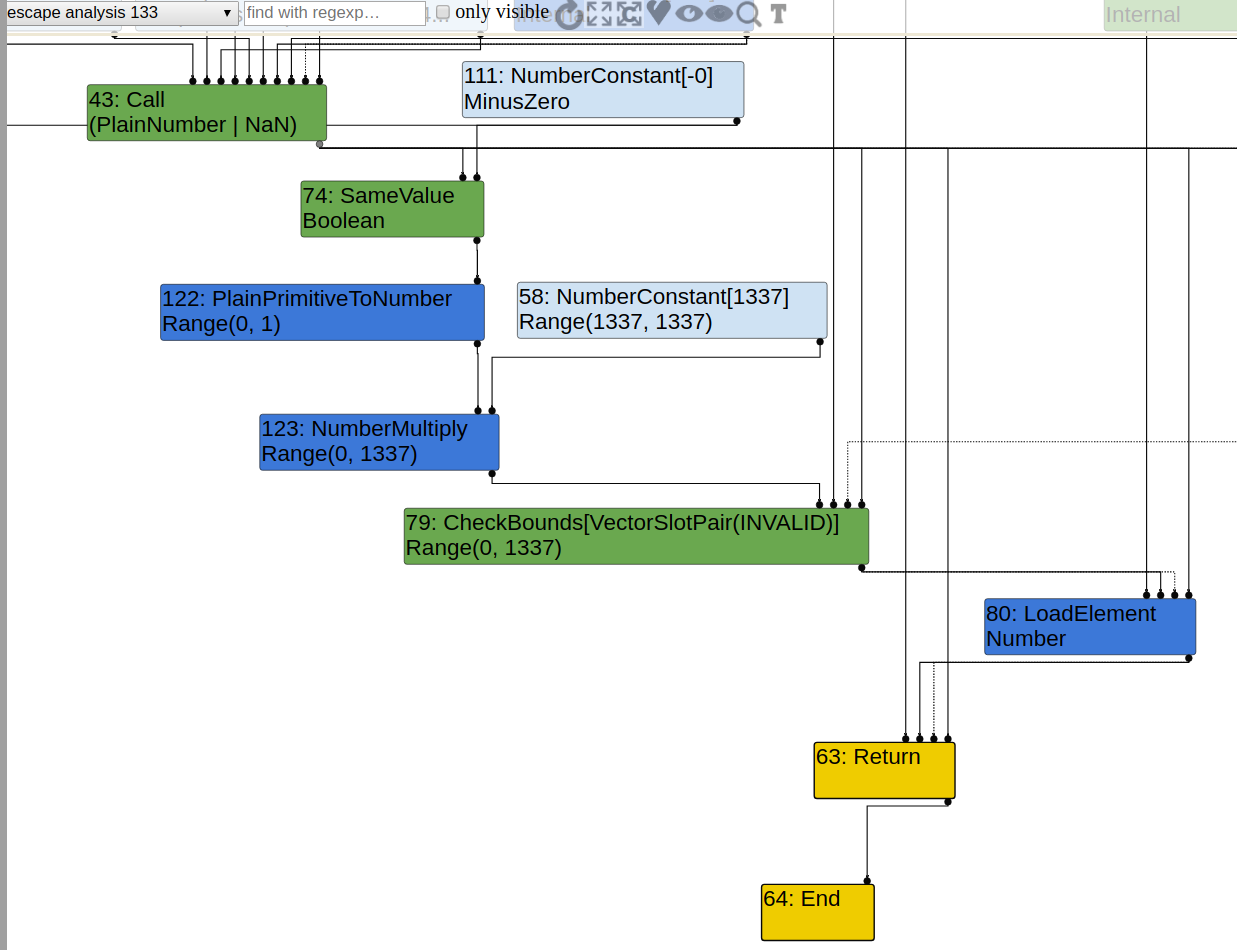 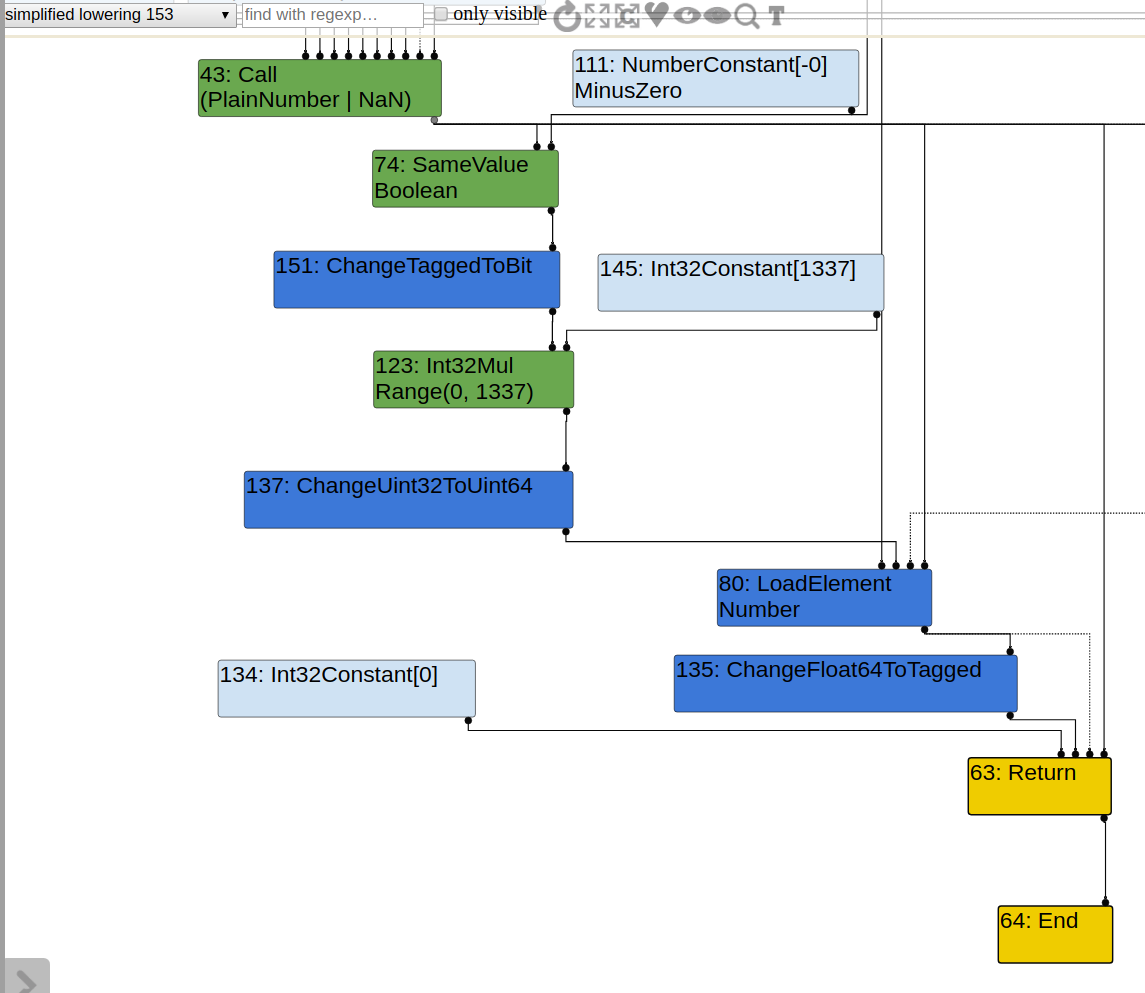 But it is clear if we look at turbolizer. This is the graph just after EscapeAnalysis, so the critical phase SimplifiedLowering that removes bound checking has not been reached yet. 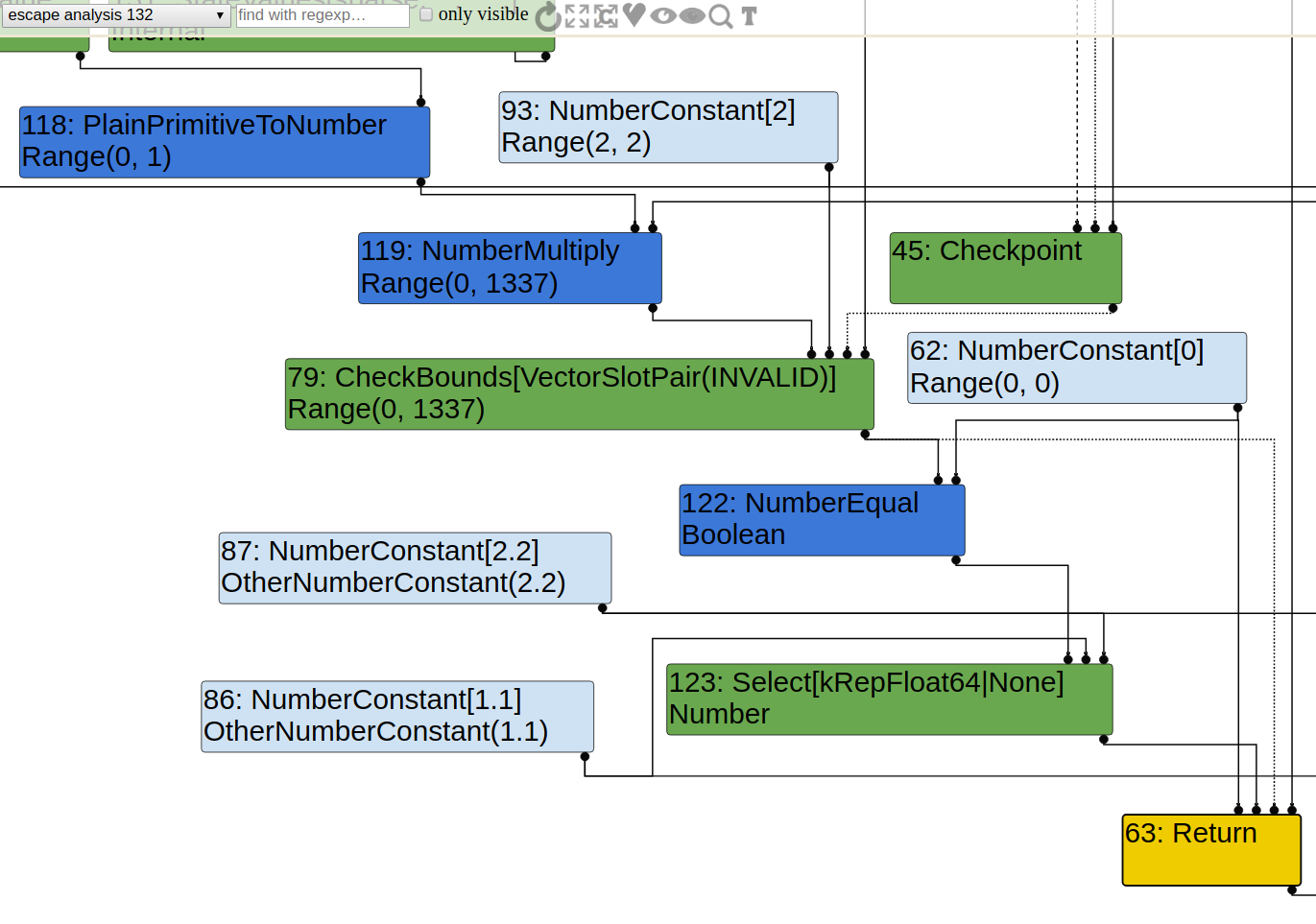 Therefore, after CheckBounds node is eliminated, and when tmp==1337, the result will be 2. However, if array length is larger than 2, such optimization cannot be done, therefore the array access will still present so that we can trigger the OOB read. 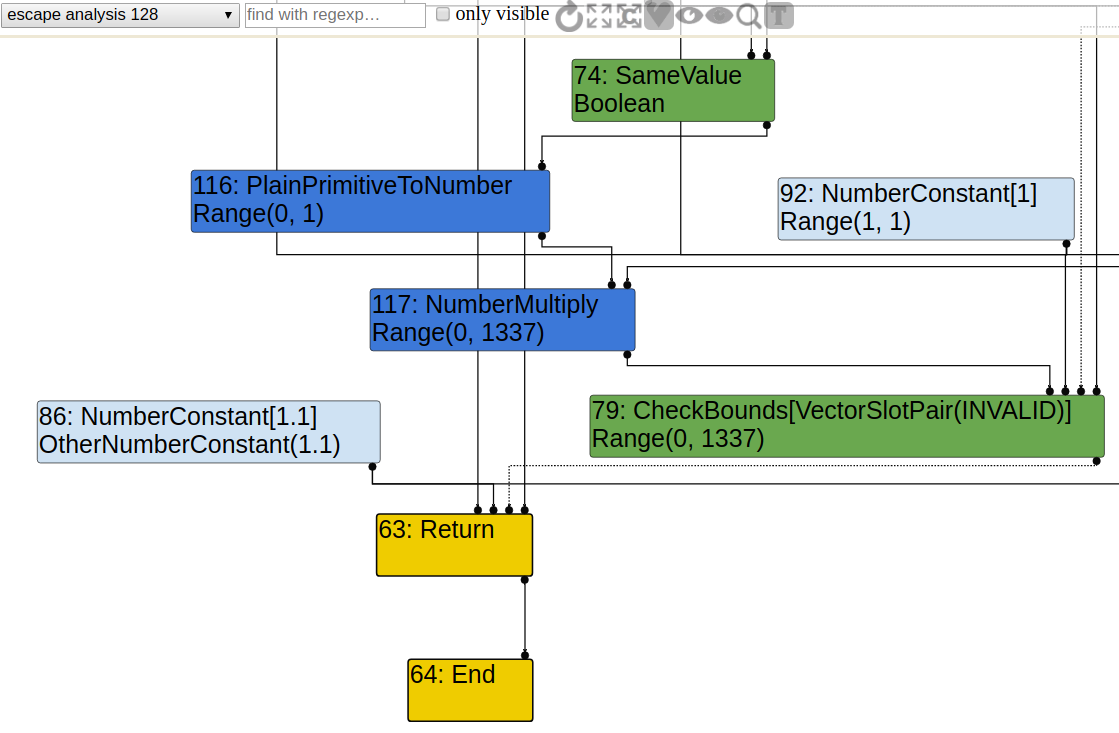 The pseudo-code now becomes this.

The basic logic is, the result should always be 1.1. If tmp is larger than 1, it should be bailed out in CheckBounds operation, which will be eliminated later in SimplifiedLowering. The idea of such optimization is, if we know tmp is within the bound, it must be 0, so arr[tmp] is unnecessary as it is always 1.1.

For the working PoC that can cause OOB read, the graph is a bit weird: type for SameValue node is Boolean, even if from input nodes type false can already be inferred. Such type propagates and causes Range(0, 1337) to appear at NumberMultiply node, which does not seem to give information that can eliminates the CheckBounds node, since the array length is 3. Nonetheless, the CheckBounds node is still eliminated after SimplifiedLowering, and type for Int32Mul is still Range(0,1337). How can CheckBounds node be eliminated given that index is typed with Range(0,1337)?

The code corresponds to bound checking elimination is at simplified-lowering.cc:1559.

If I set a breakpoint here, it stops 2 times. For the first time, index_type is indeed Range(0,1337), and the elimination is not done. However, for the second time, index_type becomes Range(0,0), and at this point the CheckBounds node is eliminated.

In my opinion, after first time the breakpoint stops, the type information of SameValue node will be retyped to false during SimplifiedLowering phase. Such retyped type information will be used for bound checking elimination again, and this is where second time the breakpoint stops. Then SameValue node is typed back to Boolean again, which explains Range(0,1337) of Int32Mul after SimplifiedLowering phase. This does NOT have to be correct, and is just my guess, since the code is too long and I cannot find related code about this.

In PoC, OptimizeFunctionOnNextCall is used twice. For the first time NumberExpm1 node is generated for Math.expm1, and in the next call, since "a" is not a number, the function will be optimized. For the second time, a Call node will be generated. For the loop case, optimization also occurs twice, and de-optimization occurs just after the first optimization.

I am not sure why turbofan does not generate a Call node in the first time, given the previous argument is always a string instead of a number, since obviously it is very likely for this optimization to bail out in the next call, making such optimization useless. Turbofan should optimize the function in favor of information about arguments gathered in previous calls, so I am not sure what happened here. Maybe I was wrong at some point?

Another point to note is that we cannot put f(-0) before function is compiled, otherwise the result will be undefined. 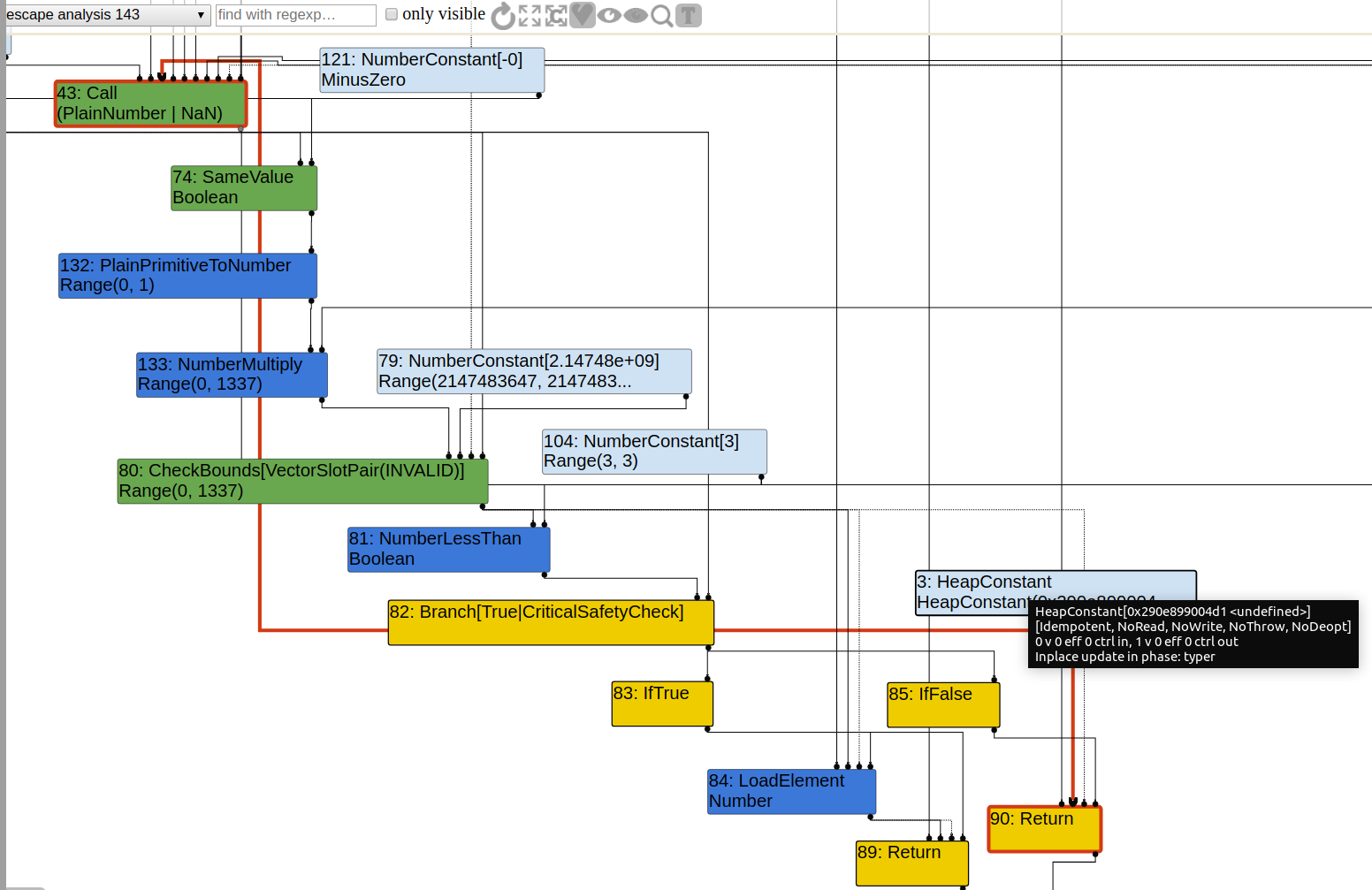 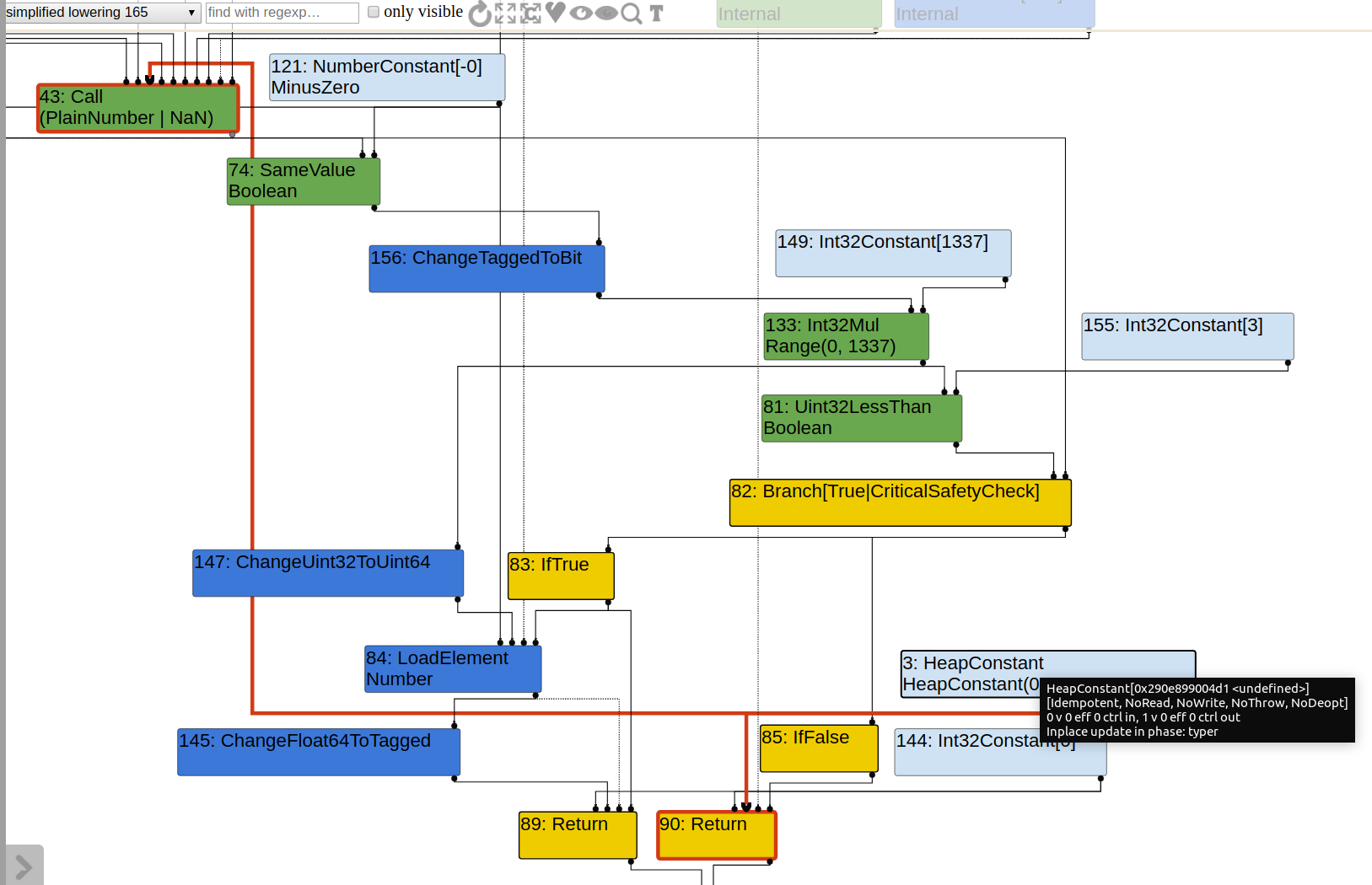 I think the reason for this is that f(-1) causes out-of-bound, so turbofan can learn from such call and produce graph that handle the out-of-bound case, instead of just bailing out when OOB occurs, which is the case when f(-1) is not called.

In one of the previous articles, a piece of code that triggers the bug is provided.

The author is not sure why f(0) is required, since things do not work if we delete this. If we look at the JIT, you will find the second compilation, which is used to produce Call node, is not done. Only the first compilation that generates NumberExpm1 is done, which is de-optimized in the next call. If we look at files that --trace-turbo generated, file turbo-foo-1.json does not present.

If we force the second optimization, bug can be triggered.

In addition, if we separate the loop, the bug can also be triggered.

My guess is, as the loop goes, V8 finds that foo have no side-effect, so it will not execute foo function anymore, otherwise there is no reason for the second optimization to not occur after de-optimization. Indeed, if we add some side-effect to foo, the bug can be triggered again.

Again, this is just my guess and does not have to be correct. I will be glad if anyone can point out my mistake.